In previous research at the Institute for Manufacturing we explored the phases and transitions of industrial emergence and developed a framework for mapping industrial emergence. On the basis of that framework, a suite of tools was created. Each of these tools were based on the technology roadmapping principles in which one axis is time-based and the other comprises a number of thematic categories.

We want to use some of these tools in the Bit by Bit project in order to map and understand the emergence of the 3D printing industry. The challenge is that the industry is very complicated, with this complicatedness stemming primarily from the huge variety of 3D printing technologies. The main technologies currently being used by leading companies are fused deposition modeling, stereolithography and selective laser sintering but there are also many more.

One of the approaches that we’ve used in the past is to create ‘quick scans’ of industries (e.g. synthetic diamond, silicon gyro, digital camera). These have been historical maps that have been generated decades after industrial emergence occurred. Drawing on existing historical accounts allowed such maps to be created relatively easily and allowed the identification of the key phases and transitions, and barriers and enablers to emergence.

For a live industry encompassing so many different technologies it is far more challenging. It has been necessary for us to try to simplify what is a rich and evolving industrial landscape. The mapping approach we’ve elected to take involves looking at individual companies to see what technologies they have been developing, the products they have released, and the markets into which they’re being sold.

Rather than consider the full range of thematic categories contained within the framework for mapping industrial emergence (value creation, value capture and value capture), we elected to just focus on the application element of value capture. Looking back to the origins of 3D printing, three main application areas are evident:

These three applications are used as the three layers of our maps.

Before going any further it is important to provide a caveat. We have so far only used publicly available data (e.g. annual reports, company websites, newswire, industry blogs) when creating the maps. This means that the picture is often far from complete and we recognise the need to collect data from the companies themselves so that our maps are more comprehensive.

The benefit of the mapping approach is that it allows the effective visualisation of the history of a company’s products, the technologies these are based upon, and the different markets that are the customers of these products. In the EOS example below it is readily apparent that automotive was a lead user for EOS’s stereolithographic product line and again when EOS developed its EOSINT S line. 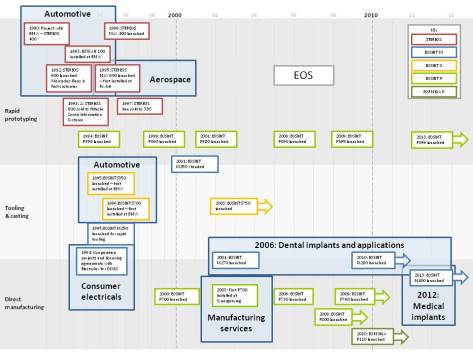 A visual limitation of this approach is the discrete categorisation of a 3D printer into a particular application. Depending on the requirements of the customer, these machines are often used for a variety of purposes. For example, EOS promotes its EOSINT P396 as allowing “the tool-free manufacture of serial components, spare parts, functional prototypes and models directly from CAD data”. Despite the multi-purposeness of the product, our mapping technique only allows it to be assigned to a single application and it has therefore been put in what we understand to be its primary application (rapid prototyping).

The EOS map is just one of several maps that we have produced of leading 3D printing companies. Some interesting questions arise from these maps that we are considering exploring:

We are also working on a separate visualisation that shows how different companies in the 3D printing industry have acquired (internally and externally) the capabilities of different 3D printing technologies. We’ll share more on that in a future post.

Image source: Simon Ford, with thanks to the subject, Alex Driver

Exploring how 3D printing is changing the world around us